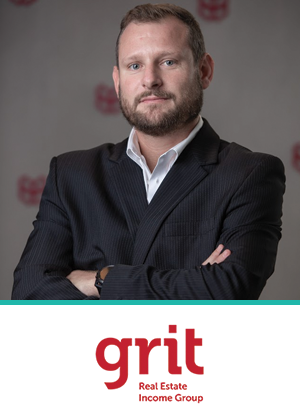 Jaco Van Zyl holds a BCom degree from the North West University, a BCompt (Honours) degree from the University of South Africa and he is a qualified Chartered Accountant. After completing his articles, he moved to Federal Airlines as Financial Manager and ultimately assumed responsibility of the full finance function of the South African and Mozambican operations. In January 2012, Jaco Van Zyl joined the exploration drilling division, Geosearch of the JSE-listed group, Sentula Mining, as the Financial Manager and developed into the CFO for the Geosearch group. Here his African experience expanded further into Mauritius, Botswana and Mozambique. Since joining Grit in February 2016, Jaco has assumed responsibility for the Group’s reporting and treasury function, effectively flowing funds within the Grit structure and maintaining debt facilities.