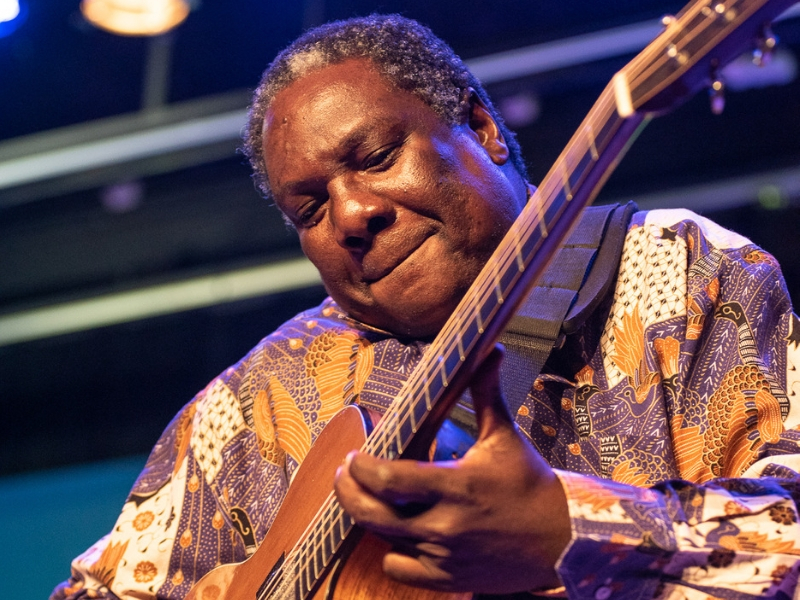 Vusi Mahlasela is a South African musician who has been dubbed “the voice” of South Africa, Vusi Mahlasela has performed worldwide, including at Nelson Mandela’s inauguration in 1994 and at his birthday tribute in London’s Hyde Park in 2008, and at New York City’s famous Radio City Music Hall in 2009; in 2011 he released his Say Africa album, produced by legendary bluesman Taj Mahal.

Vusi Mahlasela’s songs of hope connect Apartheid-scarred South Africa with its promise for a better future. Raised in the Mamelodi Township, where he still resides, Vusi became a singer-songwriter and poet-activist at an early age teaching himself how to play guitar and later joining the Congress of South African Writers. After his popular debut on BMG Africa, “When You Come Back,” Vusi was asked to perform at Nelson Mandela’s inauguration in 1994. Vusi has toured globally and shared the stage with Dave Matthews Band, Sting, Paul Simon, Josh Groban, Ray LaMontagne, Natalie Merchant, Taj Mahal, among many others. In 2003, fellow South African Dave Matthews signed Vusi to ATO Records and began releasing his albums in North America to great acclaim.  Vusi was honored to open for Dave Matthews Band when the group performed in South Africa for the first time in 2013 and joined the band.  One of his most treasured performances was in 2010 when he helped ring in the World Cup in South Africa, at Orlando Stadium in Soweto.  His iconic song “When You Come Back” was the theme song for the South African World Cup coverage on ITV in the UK.

Vusi has released seven studio albums to-date; his latest release is “Sing to the People” (ATO Records), a celebratory live recording looking back on twenty years since his first album.  In light of his international and national acclaim, the SAMA Awards (South African Music Awards) honored Vusi with a Lifetime Achievement Award in 2014.  Vusi was proud to have been an ambassador to Nelson Mandela’s 46664 campaign (an awareness effort surrounding the HIV/AIDS crisis in South Africa).  Vusi holds an honorary doctorate degree from the prestigious Rhodes University in Grahamstown, SA.  This fall, Vusi received a second honorary doctorate degree from the University of KwaZulu-Natal.  Additionally, South Africa’s former President Jacob Zuma awarded Vusi with the National Order of Ikhamanga, recognizing him for “drawing attention to the injustices that isolated South Africa from the global community during the Apartheid years.”

As Nobel-Laureate, celebrated author and longtime champion of Vusi’s Nadine Gordimer, once put it best, “Vusi sings as a bird does, in total response to being alive.  He is a national treasure.”

The Mzansi Youth Choir has likewise performed for luminaries and heads of state, including, most recently, Egyptian President Abdel Fattah el-Sisi, at the Arab and African Youth Platform in Egypt, as well as at international festivals including the illustrious International Youth Choir Festival at London’s Royal Albert Hall, and alongside superstars such as Andrea Bocelli, Josh Groban, Shakira and Beyoncé.