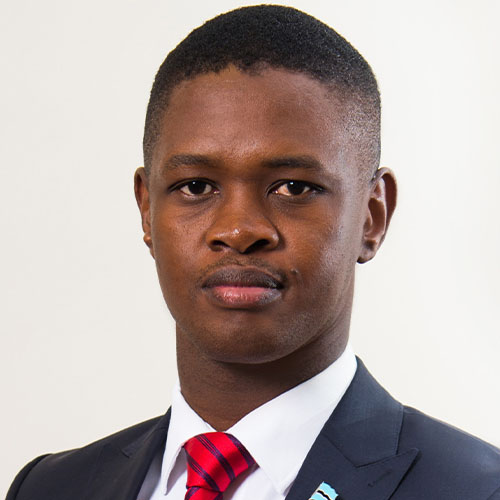 He has successfully completed an Executive Masters Degree in Entrepreneurship at the University of Botswana.

Hon. Rakgare is a passionate footballer & table tennis player with good playing record in both sporting codes. He played for Notwane FC juniors for 5 years, joined Black Peril FC in the National First Division League before retiring to focus on academic commitments.

He is also the Former Secretary General of Media Social Club (MSC). A social club of both practicing and retired media practitioners in Botswana.

Currently Member of Parliament for Mogoditshane Constituency and appointed as the Honourable Minister of Youth, Gender, Sport and Culture.

He was the Botswana Congress Party Youth League President from 2015 and 2017.

He was appointed the first Student Peer Ambassador for Sports and Culture at the University of Botswana in 2010.

He was elected President of the Student Representative Council (SRC) at the University of Botswana in 2009.
WORK EXPERIENCE

Administration, Marketing and Communications Executive at ILES, an education wing of BOPEU – May 2017 to December 2018.

He won a record 15 Media awards during his 11 year service as a Sports Reporter.

Sales and Marketing representative at SBM Pipes in 2005

He Co-founded the Annual Thamaga Christmas Football Tournament, it was founded in 2006 and is still running.

Worked with various NGO’s in Mogoditshane to mobilize resources to help the under privileged.

Assisted all schools in Mogoditshane (3 primaries, 2 juniors and 1 senior school) during their Prize Giving ceremonies with Prizes for best students both academics and sports.

He is an avid participant of the popular annual Matlolapata games both as a player and volunteer.

Last update on Oct 26, 2022
Published Oct 26, 2022
Author: WikiMzansi
Categories: Botswana
Tags: There are no tags for this post