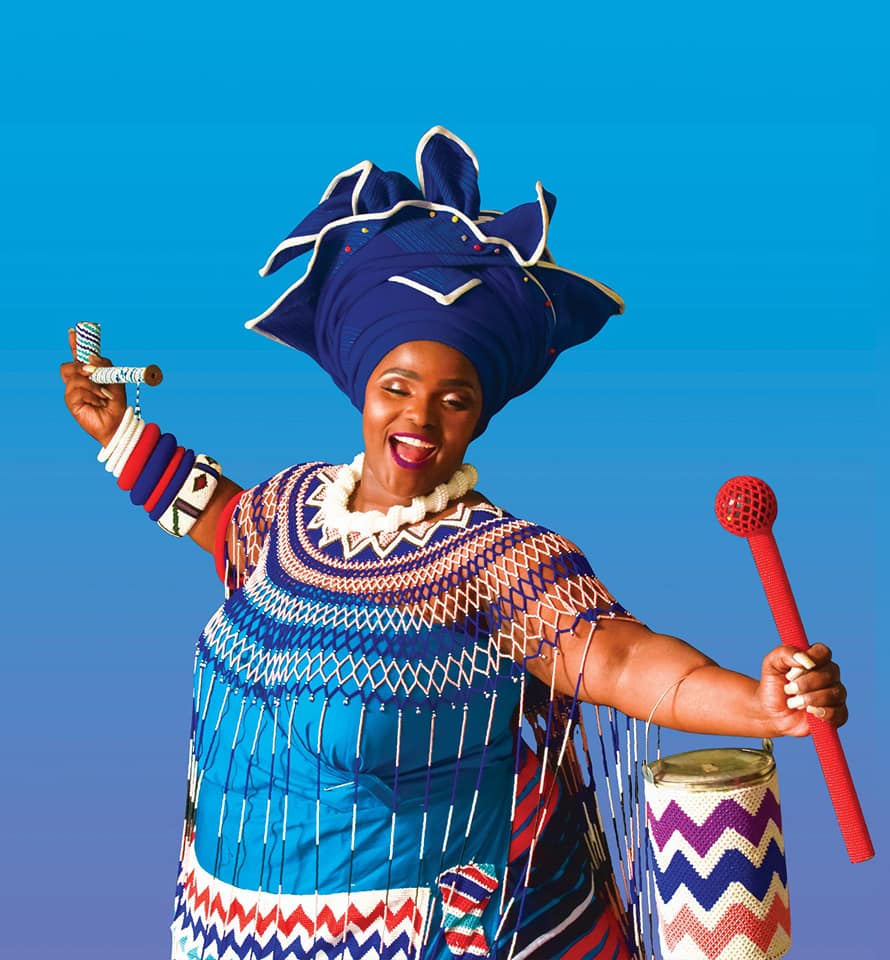 Born and raised in the Eastern Cape, Jessica is one of South Africa’s most sought after female Imbongi (praise singer) and has made her mark in a male dominated cultural terrain. Invoking the role of this ancient tradition, largely influenced by her grandmother’s isiXhosa storytelling in the village of Nqamakwe, Jessica offers insightful commentary on contemporary affairs. She has performed alongside musical icons such as Dolly Rathebe, Thandi Klassen, Abegail Kubheka and Dorothy Masuka. Jessica Mbangeni made her mark as a praise-singer when she joined Multi-Grammy Award Winning Soweto Gospel Choir in 2002 and toured Germany, Australia, New Zealand, Scotland and the 37 Cities in United States of America.

She has performed at prestigious events such as the 46664 concert in Cape Town and the South African President Thabo Mbeki’s second inauguration. Ms Mbangeni is a resident artist of ABSIP and PPC South Africa and has won awards and been nominated for several awards. Some of her accolades include the Imbokodo Award for Indigenous language preservation, 2 South African Traditional Music Achievement Awards for Best Female Album and Best isiXhosa Album, SATMA Award Best Song of the Year 2016. She has also won Eastern Cape Excellent Achiever’s Award 2014 and 2016

In 2014 she was nominated for 7 categories in the SATMA Awards and nominated for Best Creative Album by the Wawela Awards in 2015. As part of Jessica’s journey, she has been mentored and channelled by Chris Gardner, the CEO of Gardner Rich Investment Holdings and Co, and upon whose life, the movie, The Pursuit of Happiness, portrayed by Will Smith, was based. A mentor to other artists herself, Jessica is currently being mentored by Yvonne Kgame, the former Content Director of SABC, TryphosaRamano the CEO of PPC and the former Chairperson of ABSIP. Jessica has also graced the Thabo Mbeki Annual Lectures and graced with Praise Poetry at the former president’s Thabo Mbeki’s mother’s funeral. She was the opening act at the Afcon Cup in 2016. In 2015, Jessica graced the coronation of the Xhosa King Zwelonke Mpendulo Sigcawu, Thabo Mbeki’s 70th Birthday in 216, Winnie Madikizela Mandela’s 3 events of 80th Birthday celebrations in 2016, Former Public Protector Thuli Madonsela’s Annual Lecture 2016, South African Women’s Chartered Accountants 2016, 105 ANC Birthday in Orlando Stadium in 2017 ushering State President Jacob Zuma, 105 ANC Birthday Celebration in Mthatha Sports Grounds ushering Deputy President of South Africa Cyril Ramaphosa in 2017.

A former Domestic Worker from the age of 17 in the rural village of Nqamakwe Eastern Cape while she was in high school until she dropped out at Tertiary institution where she was studying part-time and working for the lectures of the Eastern Cape Technikon now Walter Sisulu University. On her arrival in Jo’burg to pursue her carrier in music she found that the streets of Jo’burg were not paved with gold and she went back to her job as a Domestic Worker in Fordsburg, Mayfair and Homestead Park. The 38 year old Jessica Mbangeni has a deep love and passion for community building through music and that not only resonates through her work, but through every aspect of her life, learning that it’s the rhythm that guides one through life’s everyday challenges,joys, highs and lows.

Despite her many talents, this mother of two is working tirelessly to lead her team of employees in the manufacturing of exclusive clothing designs in her KwaNtu Afrocentric Designs Store C91, Oriental Plaza Fordsburg, Joburg which you will see high quality African designs which weave the story of its people being acceptable as part of everyday wear in corporate corridors, collaboration with global brands such Maxhosa by Laduma,
Dressed greats such as Advocate Sonwabile Mancotywa, Yvonne Kgame, Sal Masekela; musicians like Vusi Nova, Dumza Maswana, Max Hoba, Siphokazi, Ringo Madlingozi; Criselda Dudumashe, choirs, public figures and parliamentarians as well as walk ins . If the support she’s been receiving from all quarters is anything to go by, she’s definitely on the right track.