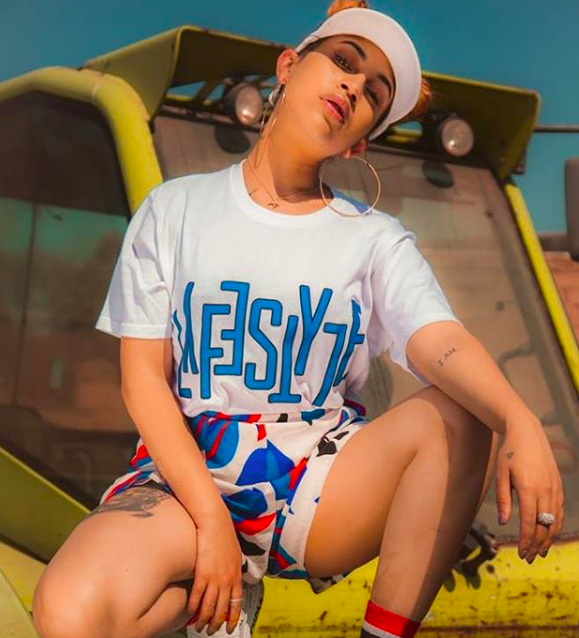 Rowlene is a South African singer songwriter and aspiring actress well know for hit single SMA where she is featured by Nasty C.

Born and raised in Elsies River, Cape Town, Rowlene performed in various singing and dancing competitions as a child.

She dropped her first single titled ‘Imposter’ early in 2015 as an exclusive debut track on Good Hope FM. It quickly gained her exposure and caught the attention of former Free World Music executive, Zyne Marcus, who then offered her a contract to work alongside Hip Hop artists such as Nasty C, Erick Rush and Tellaman. Being the only female artist in the camp, she has introduced a softer, sexier, and more sultry sound to the rap dominated label. This is evident on the track “Phases” Which lead to her claim to fame – in late 2016, on her feature with Nasty C titled Phases. She has worked with various South African household names such as Riky Rick, Bigstar Johnson, Tellaman, Gemini Major and the aforementioned Nasty C. Rowlene is currently signed to Nasty C’s record label Tall Racks Records.

Rowlene’s collaboration with Nasty C on his hugely successful “Bad Hair” album. The popularity of “Phases” caught the attention of Hip Hop heavy weight Riky Rick, who was impressed by her “celestial voice” and led to Rowlene’s second single called “Dance with You ”. Beginning her musical journey at just fourteen, Rowlene has participated in several local music workshops which have developed her as an artist and encouraged her to pay it forward.

She founded a community youth initiative called Utopia, which provides a professional platform for young aspiring artists and performers in Cape Town. This has led to her competing and participating in various events, such as, The Annual Mayors Golf Day, Woordfees Festival, The Kuier Festival, and being involved in a variety of Sun International Events and Productions. After spreading her wings,’ she spent most her time touring the “Bad Hair” album with Hip Hop Sensation Nasty C which inspired her to do music full-time. Rowlene has only decided to pursue her passion for music, actively September 2016, where she started on her most recent project entitled “The Evolution of a Robot”

After the release she featured on A-Reece second album “From Me To You and Only You” with single titled Pride. Shortly after the release she then featured on Flames debut EP titled Clouds, on the single “Between Me & You.” After the features transgressed she dropped her single “Swang” produced by Gobbla beats. On the 25th of September she released a 20 track project titled Evolution of A Robot 2nd Generation with features from Kid X, Nasty C, Gemini Major,Lastee,Crowned Yung,Tellaman amongst others

Last update on Jun 9, 2019
Published May 14, 2019
Author: Wiki Mzansi
Categories: South Africa
Tags: There are no tags for this post